(12-7-19) – The Marion Local Flyers continue their historic run in OHSAA State Football Playoffs as they win the D VII title in their 9th consecutive trip to the finals with a 28-6 win over Lucas. Marion Local wins their 11th state championship and the Midwest Athletic Conference picks up win their 35th football title.

It was the 2nd MAC title this weekend, on Friday Anna knocked of Springfield in the D VI game.

The first half was impacted by key penalties for both teams. After taking the opening kick-off Lucas forced Marion Local to punt the ball away, but a running into a kicker penalty gave the Flyers another chance. That opportunity would lead to a one yard TD run by Dylan Heitkamp with 7:45 remaining in the 1st quarter.

Marion Local would return the favor in the 2nd quarter when leading 14-0, it looked like the Flyers had another TD, but a holding penalty would nullify it. Facing 3rd and goal Kyle Muhlenkamp would be picked off by Logan Niswander at the 1 yard line to end the scoring opportunity for the Flyers.

Marion Local had 176 yards total offense in the first half, while the Cubs were held to 75 yards.

5:02 left in the half. pic.twitter.com/nwuKDAyzL7

In the 2nd half thanks to their special teams Lucas made a run at the Flyers. The first came after a Flyers TD when Carson Hauger ran back the kickoff 96 yards for Lucas, the longest in OHSAA football championship game history. On the the kickoff the Cubs surprised Marion Local with an onside kick that they recovered. But Lucas was unable to put points on the board.

Congratulations to the Marion Local Flyers on their OHSAA Division VII State Championship victory. Final score, 28-6. We've got some action from the 2nd half. @goodwit56 @CubsFootball pic.twitter.com/h1wt21BAlj

The Flyers’ Brandon Fleck scored 3 TDS and rushed for 133 yards to lead the offense. 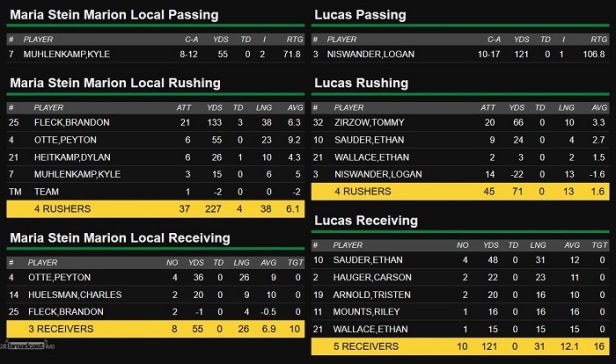 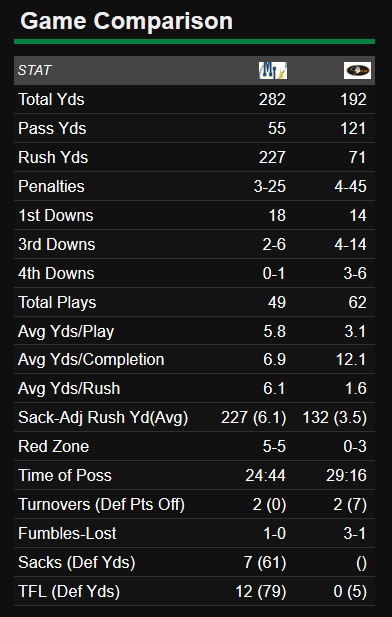 #OHSAA D7 FOOTBALL: Marion Local strikes first with a 1-yard TD run by Dylan Heitkamp after the drive was extended on a roughing the punter penalty.

7:45 left in the first quarter. pic.twitter.com/GsQ9WXhZgu

#OHSAA D7 FOOTBALL: Brandon Fleck runs it in from 8 yards out to give Marion Local a 14-0 lead with 11:21 left in the first half. pic.twitter.com/HBjLuqVgUG

#OHSAA D7 FOOTBALL: Brandon Fleck's second rushing touchdown of the game gives the Flyers a 21-0 lead with 5:02 left in the third quarter. pic.twitter.com/v8zTwBpP6G

#OHSAA D7 FOOTBALL: Brandon Fleck scores his third TD of the game to extend the Marion Local lead back to three scores.

2:36 remaining in the game. pic.twitter.com/n4nSmO4tUz