(4-24-20) With the pandemic restrictions in place and no sports at any level happening, ESPN’s ‘The Last Dance‘ has been a smash hit.

The documentary highlights Michael Jordan and the Bulls run to six NBA titles. One of the key parts to the Bulls success was head coach Phil Jackson. This is a look at the ‘Last Dance’ for Jackson  at his high school in Williston, North Dakota. 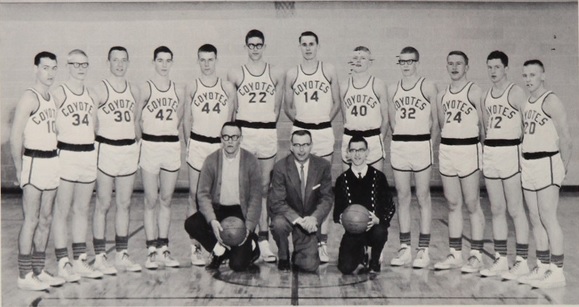 Jackson , a 1963 graduate of Williston (ND) High School was a part of the 1963 North Dakota State Champions during his senior season.

The Coyotes beat Grand Forks in the title game 64-50.

Jackson competed in multiple sports for Williston, including football, was a pitcher on the baseball team and threw the discus in track and field competition.

Jackson had a successful career after leaving Williston. He went on to star at the University of North Dakota, played for the NBA’s New York Knicks (2nd round draft choice) and guided the Bulls and Lakers to a total of 11 NBA championships.

The fieldhouse in Williston was named in Jackson’s honor, and the bypass on the north end of town is named Phil Jackson Way.