(5-2-20) This could have been a special season for Coldwater Varsity Baseball Coach Brian Harlamert. Last season the Cavaliers picked up a D III State title, thanks to that run Harlamert’s career record ended with 490 career wins.

When the OHSAA cancelled all spring sports for the 2020 school year due to the coronavirus…Harlemert’s quest to join the magic 500 career win club was put on hold until 2021.

Needing just ten wins in 2021 should not be a problem for Harlamert, since he became the head coach in 1998 he has won at least 13 games every year, during his 22 year career he has won 20 or more games 16 times. 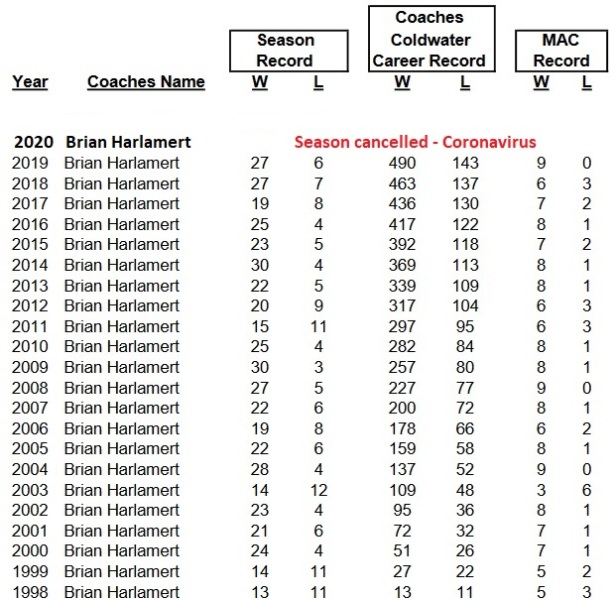 At most schools winning 500 baseball games would put you at top of the win list, not in Coldwater.  Legend and Hall of Fame Coach Lou Brunswick (1959-93) won 750 games during his long career at Coldwater. Add to that since 1950 the Cavalier program has had just four coaches (Gabby Wilker 1994-97 and Joe Reed 195-58).

The biggest disappointment from the cancellation for Harlamert and the Cavs baseball program is that the eight returning Seniors were not able to compete in their last season. They did not have the opportunity to defend their state or MAC title from last season…another disappointment for members of the Class of 2020.

Coldwater’s baseball program continues to be one of the top baseball programs in Ohio. The only thing that has stopped them from winning over the years has been the coronavirus.

Harlamert is a winner from his high school and college days, with him in charge the Cavs are in good shape for years to come.