(10-26-19) Week 9 of the high school football season brings a little more focus on who will be playing in week 11. Joe Eitel’s latest OHSAA computer rankings give us some solid insight to what teams are in and what teams are out.

In D III Region 12, Eitel has listed four teams as clinching playoff positions, including Chaminade Julienne, Franklin, Wapakoneta from the WBL and Trotwood-Madison.

St. Marys from the WBL is in a good position to make the final 8, the only question for the Roughriders…will it be a home game or an away game. They are currently at #4, which would be a home game, slipping to #5 would put them on the bus for a road trip. They finish the season against Defiance.

Greenville, who has not been in the playoffs in this century will need some help to qualify, they are at #9 this week.

The big news in D VI Region 23 is Gibsonburg…they could be staying home and missing the playoffs with an undefeated 10-0 record. Eitel has them ranked #10 this week, two spots out of qualifying and three teams (Minster, Allen East and Fairview) above them in the rankings who Eitel has listed as ‘control own destiny‘. The Golden Bears will need one of those three teams to stumble and for sure a win over week 10 opponent Hopewell-Loudon (4-5). 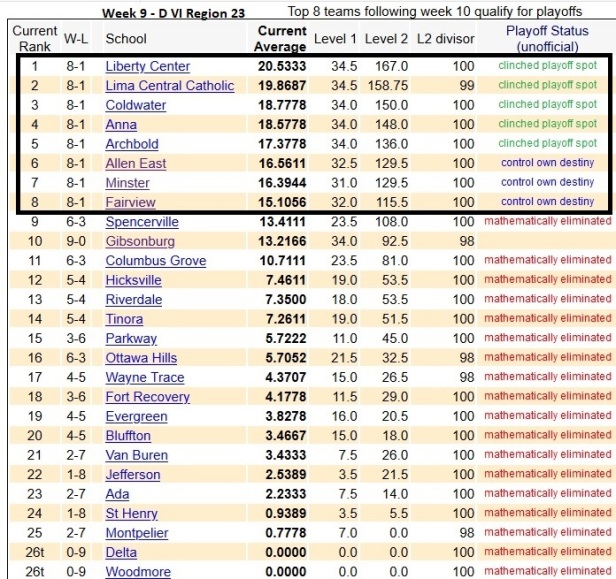 New Bremen (7-2) will have a battle with next door neighbor D VI Minster who is 8-1…Week 10 seems to be start of the playoffs for the Cardinals.

Two NWCC teams will battle each other next week for a top 8 spot, #9 Hardin Northern will host #8 Waynesfield-Goshen, both teams are 7-2.