In March of 2015 Superintendent  Rich Seas, after 12 years at Coldwater, announced that he would be leaving the school system in the summer to take over the Adams County Ohio Valley Schools.

The Seas family over those 12 years of living in Coldwater had been a big part of the Boys and Girls  Cross Country and Track programs. In his last year as a Cav Dan Seas finished 4th (16:32.05) at the MAC Meet, while his sister Lauren was third (19:28.58)  in the MAC girls event.

The Seas are still very active in cross country, they now have three of the family doing quite well at their new school, Peebles, in Southwesttern Ohio. 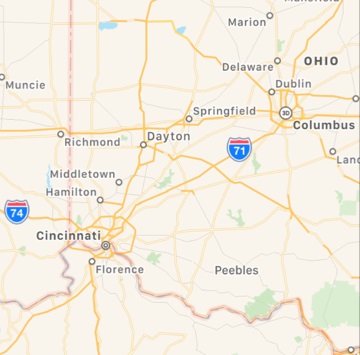 Jenny, who is a Junior at Peebles, has been running away from the pack this cross country season. On Saturday she dominated the Ohio Classic Meet in Hillsboro with a time of 19:36, almost three minutes faster than the second place finisher.

How good is Jenny?

During her last year as a Cavalier she won the MAC JH Cross Country Meet and did it against some of the most talented runners in northwest Ohio, who are now all doing great and winning at the high school level.

Don’t feel to bad for the Coldwater girls cross country team, they won the Purple Division of the Marion Invitational on the campus of Indiana Wesleyan University yesterday.

Her brother Matt, who is a Senior, is leading the Peebles boys team this fall. He was second yesterday with a time of 17:04.

As a Freshman, Seas was 39th at MAC Meet.

Plus, their little sister Katy, who is an eighth-grader won the middle school race in a time of 13:27 at Hillsboro. Peebles doesn’t have enough runners to compete as a team, yet.

You can bet that Peebles Varsity Cross Country Coach Ty Stephens will make sure that Rich and the rest of the Seas family are happy for the next several years.