The Davenport family filed a lawsuit this week asking the court to invalidate the AHSAA’s suspension of Maori Davenport, a 6-foot-4 Rutgers signee and the top candidate to be Miss Basketball.

“After Maori Davenport appeared before our Caucus and very eloquently explained her situation, the 77 Republican members of the Alabama House stand ready to help her regain her eligibility in any way that we can. Without exception, our legislators urge the AHSAA to immediately reinstate this impressive young woman who simply wanted to represent our country on an international level.”

Whereas Charles Henderson High School basketball standout Maori Davenport’s athletic skills and talents earned her a spot on the Team USA roster and a gold medal at the 2018 FIBA Americas U18 Championship; and,

Whereas the USA Basketball program regularly sends a stipend to players who compete for its teams but failed to first check with governing sports officials in Alabama before compensating Davenport; and,

Whereas the 18-year-old Davenport responsibly self-reported the oversight and immediately returned the stipend as soon as it was discovered the check sent to her by USA Basketball exceeded the allowed limit in Alabama; and,

Whereas the Alabama High School Athletic Association ruled Davenport ineligible to play this season in spite of her sincere and timely efforts to rectify a situation that was no fault of her own; and,

Whereas the AHSAA stubbornly refuses to demonstrate empathy and reconsider its decision despite a state and national outcry on Davenport’s behalf by advocates and supporters of amateur athletics;

now, therefore, be it Resolved, that we, the members of the Alabama House Republican Caucus, hereby urge the Alabama High School Athletic Association and its director, Steve Savarese, to reinstate Maori Davenport’s amateur eligibility without delay and take significant steps to ensure that no other student athlete is subject to such callous, unfair, and unjust treatment in future situations of similar circumstance should they arise.

Rep. Kyle South, R-Fayette said he would introduce a bill on the eligibility issue with Maori Davenport – the bill has been pre-filed for consideration in the 2019 regular session…currently, 87 of the 105 members of the Alabama House have  signed on as co-sponsors

“Rather than taking special circumstances into consideration and impartially considering the facts at hand, the Alabama High School Athletic Association has created an unnecessary national controversy and callously ruled in a manner that adversely affects an innocent young woman’s eligibility. Time and time again, the AHSAA has engaged in behavior and ruled in a manner that clearly calls for more oversight of its actions. Considering the AHSAA receives a majority of its funds from taxpayer-funded public schools and the athletic activities of public school students, there is ample justification for government oversight of its operations.”

It was my honor to welcome Maori Davenport to the Alabama Senate today. pic.twitter.com/ZUEmWGjKXe 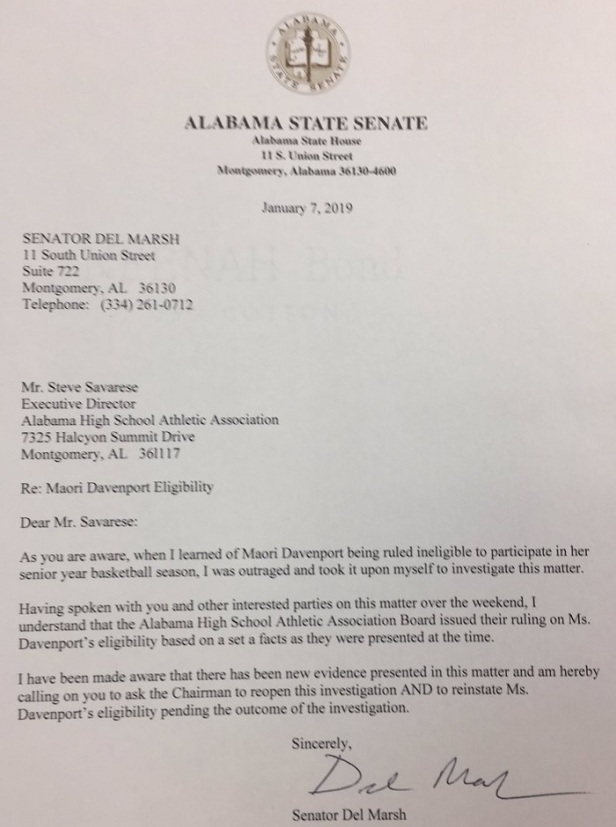 Maori Davenport should be reinstated immediately. The Alabama High School Athletic Association, specifically Steve Savarese, ruled Maori ineligible for a clerical error. It’s heartless, mindless, and wrong. Savarese has the authority to fix this. He needs to fix it. Now. pic.twitter.com/hG7sktVe5d

(1-8-19) A national uproar caused in part by ESPN’s basketball analyst Jay Bilas has turned ugly according to a statement from the Alabama High School Athletic Association statement:

Statement by AHSAA Central Board of Control president Johnny Hardin:

As President of the Alabama High School Athletic Association Central Board of Control, I would like to address the numerous stories being circulated regarding a recent eligibility ruling assessed to a student-athlete attending Charles Henderson High School (CHHS). Several facts involved in the ruling have either been misstated or ignored; therefore, I feel the need to provide the following details:

The student’s mother is a certified AHSAA basketball coach; therefore, she is required to uphold current AHSAA bylaws and rules, including the amateur rule quoted above. Furthermore, the head girls basketball coach at CHHS is a former member of the AHSAA Central Board of Control; thus, she should not only appreciate the importance of knowing and following the AHSAA bylaws and eligibility rules but also understand how imperative it is to consistently uphold the same rules.

Also, please remember, the AHSAA member schools, not Mr. Savarese nor the AHSAA staff, write and approve the AHSAA eligibility rules which include the amateur rule.

The AHSAA Legislative Council has the authority each year at the annual meeting to amend the AHSAA Constitution and rules. Meaning, each year the member schools (including Charles Henderson High School) have an opportunity to change a rule or create new ones. The penalty for violating the amateur rule has not been amended in at least the past 10 years with Mr. Savarese as executive director. Which, in turn, means each year Charles Henderson High School has agreed to the penalty for violating this rule without comment or pursuing any kind of rule change within the legislative process.

Each year these rules are reviewed multiple times during AHSAA sponsored and hosted seminars with the member schools and are available on the AHSAA website. A review of all summer conference and principals’ and athletic directors’ conference attendees show the principal for Charles Henderson High School has not attended the 2016, 2017, or 2018 summer conferences or the 2016, 2017 or 2018 principals’ and athletic directors’ conferences.

The stories and comments being circulated throughout the media and social networks are asking that an exception be made to the amateur rule because it was not the student’s fault; the fact the money was repaid, and that the student is an exceptional athlete and will miss her senior year. However, if exceptions are made, there would no longer be a need for an amateur rule. The rules are applied equally to ALL athletes. Furthermore, most eligibility violations are the result of adults failing to follow the rules. Here, the student’s mother as a certified AHSAA coach should know the rules; the school’s principal should know the rules, the head basketball coach, as not only a coach but also as a former Central Board member, should know the rules.

Another point not mentioned in the public stories being circulated is that creating an exception to this rule would have provided an avenue to exploit student-athletes by providing an opportunity for students to receive money and prizes for athletic participation and if discovered, state they didn’t know the rule, thus allowing them to return the items and retain eligibility. This is why AHSAA stresses to the leadership of its member schools how important it is to know the rules and advise their students regarding all rules that affect eligibility. Informing student-athletes of the consequences for violating such rules is the responsibility of the adults supervising them.

A high school student from Missouri has also been ruled ineligible for this basketball season for accepting the lost wages payment from USA Basketball.

USA Basketball never called Charles Henderson High School or AHSAA to ask if payment for lost wages violated AHSAA rules until November which was three months after payment was made and accepted by the student. This was not a clerical error but a complete lack of administrative oversight on the part of USA Basketball, thus possibly rendering multiple student-athletes ineligible as most states have an amateur rule.

We, as the Central Board of Control, stand by the staff of the AHSAA and thank them for their unwavering support of the AHSAA mission, educational athletics, as well as the AHSAA Constitution and Bylaws.