Gordon Shivley, our guidance counselor from 2003-17, and an educator for over 40 years, passed away today. Our thoughts and prayers are with his family. The impact Shives had on Bluffton students & staff can’t be measured. We lost a good one today, and he will be sorely missed.

(3-19-19) In a Tweet this afternoon by the Bluffton Schools Athletic Department  it was announced that Gordon Shivley had passed away. 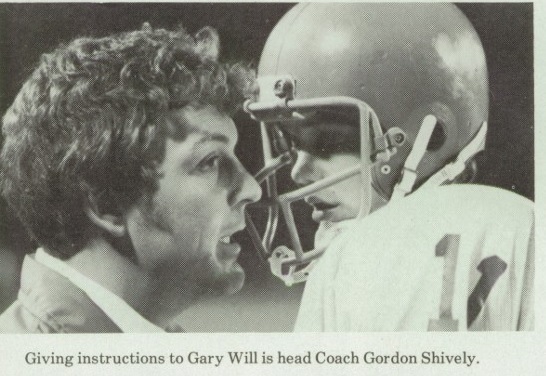 When the Midwest Athletic Conference started football play back in 1973 Shivley was the head coach and was on the sidelines for the Redskins first ever MAC game.

On September 21, 1973, Coldwater Head Coach Bill Menchhofer’s Cavaliers knocked off  Shivley’s Redskins 34-3 victory. Larry Knapke led the Coldwater ground game, which accumulated more than 300 yards, with a pair of touchdowns in the win.

Shivley’s shining method at St. Henry was lead the Redskins to their first ever MAC title back in 1977.

During his time as Head Coach at both St. Henry and Parkway he ended with 39-48-2 record.

In addition to his parents and wife, he was preceded in death by his brother Bud (Pat) Shivley of Van Wert.

Gordon was a loving man who used compassion to drive every aspect of his life. He dedicated himself to his family including his wife, daughters, sons-in-law, and grandchildren. Through his work in education as a teacher, guidance counselor, principal, coach, mentor, and volunteer, he took the time to positively motivate each person with whom he encountered. Gordon influenced the lives of students, co-workers, and players he coached at Bishop Ready, Unioto, St. Henry, Shawnee, Parkway, Spencerville, Crestview, Lincolnview, and Bluffton Schools.

Since his recent retirement, he continued his life’s mission of teaching and coaching others through volunteering at Parkway and Spencerville Schools. One of his great joys was watching his grandchildren participate in sports, music, and other extra-curricular activities. For the past five years, he volunteered his time as the scorebook keeper for the Spencerville volleyball program and was planning to help assist in coaching the varsity volleyball team this upcoming season. Although his presence will be greatly missed, his legacy of helping others will live on through all the lives he has positively impacted.

Gordon’s advice to everyone in his passing was to be sure to take the time to hug a loved one. His immediate family will be having a private service in his honor. If desired, memorial contributions may be made to the Spencerville Volleyball Program, c/o Spencerville Athletic Boosters, PO Box 66, Spencerville, OH 45887.

In lieu of memorial services, the family encourages condolences and memories to be shared by visiting http://www.chamberlainhuckeriede.com.