(8-31-17) All that separates high schools in the Stateline area is an imaginary line that divides them into the state of Indiana or Ohio. Over the years it seemed that this line was the main reason that stopped games from being scheduled between those schools from crossing that state line.

The past several years it seems that this ‘imaginary’ line is starting to disappear and schools on both side are open to scheduling each other in various sports than in the past years.

You will see from all of the AD’s who participated in this story that it has been a process that has helped both sides.  One issue that is out of their hands is that in certain sports, the states have some different start dates or do not compete during the season (boys golf is one) as the other state. But the positive seems to be the openness of more schools, on both sides of the Stateline, to work together on scheduling and crossing the border to compete.

Two great examples of recent changes, the Coldwater Swim Invitational is held at Jay County’s top class facility in Portland, while an  Indiana conference, the Allen County Athletic Conference (ACAC), has started to use the Celina Lynx as the neutral site for their Boys’ and Girls’ Golf Conference Meet. Both events solve several problems from the past, something you wouldn’t have seen several years ago.

One of the most active Ohio schools in scheduling Indiana schools, is Coldwater.

Coldwater is always willing to play Indiana schools. There are several reasons why:

We currently play several Indiana schools, including our Cross Country team traveling to Indiana Wesleyan this weekend for the Marion Invite. This is a prime example to see different facilities and different teams to compete against. Often times in Cross Country, you will see the same teams several times throughout the season.

Thanks to Jay County High School, we also use Indiana schools as our host site. Our Cavalier Swim Invitational (All MAC schools that have swim) is hosted at Jay County High School due to their tremendous facilities. We also practice swim at Jay County when we can for the same purpose. The Indiana schools have tremendous Swim facilities and we are fortunate enough to be able to have several of our meets at their locations.

The only negative thing at all is that we have tried to get on a football schedule with Indiana schools for week one but Ohio/Indiana doesn’t rotate their weeks on the same year. Therefore, we have only been able to play single year contracts with Indiana schools in football (Kokomo, Elmhurst, etc.)

South Adams and Jay County, both members of the ACAC, are capitalizing on the closeness of the Ohio schools.

I don’t see many cons to playing area teams from Ohio, but there are benefits. The first benefit for South Adams is travel. We have 7 Ohio schools less than 35 miles from us. Plus, these schools are close to our size. We actually have more Ohio schools close to our size within that radius then Indiana schools our size within that radius. Utilizing these schools has helped make scheduling easier and has made it easier on our athletes and coaches by getting us home quicker from games. Another benefit is competition level. We have found the Ohio schools we compete against are traditionally very solid programs and really push our teams to continue to get better. Finally, it allows us to play different some different teams.

In my opinion, the only con is our athletic schedules don’t always match up. The Ohio football schedule starts a week later and our weeks don’t always correspond with each other. Also, in the spring the Ohio tournament starts earlier than ours, so we miss out on a chance to play then also.

Overall, I like taking advantage of playing the local Ohio schools. I have made an effort the last five years to take advantage of this opportunity, and I look forward to continuing to add them at the middle school and high school level when possible.

Pros – The Ohio schools provide more opponent options due to our proximity to the state line. In the fall we compete in the Celina Cross Meet with several other Indian Schools. We have added Celina (girls) and St. Mary’s (boys) to our soccer schedule and play Fort Recovery in Volleyball and Girls’ Golf.  In the winter we currently participate in two Ohio wrestling tournaments (Coldwater and Franklin) and have 2 – 3 Ohio schools (Coldwater, Benjamin Logan, and Cincinnatti Moeller)   participate in our wrestling tournaments each year.  We also participate with several Ohio schools in swimming.  Our pool is actually the host site for two different swim invitationals hosted by Ohio schools. We currently play Fort Recovery in Boys’ and Girls’ Basketball. In the spring we play Fort Recovery in Softball and Coldwater in Baseball.

The Allen County Athletic Conference has started using the Celina Lynx as the neutral site for our Boys’ and Girls’ Conference Meet.

Cons – Differences in beginning and ending of sports seasons and changes in the IHSAA / OHSAA calendars. The IHSAA calendar is predicated on the football state championships being played on Thanksgiving weekend. Therefore when the Thanksgiving shifts to the last week in November the IHSAA Calendar adjusts. This will occur again in the 2018-2019 school year. The OHSAA does not adjust it’s calendar in the same manner.

Boys’ Golf is a fall sport in Ohio eliminating the possibility of adding teams / tournaments to our schedule.

Celina is the closest school to us geographically (approx. 33 miles) that has a similar enrollment to ours.

Paperwork – Although there is not extra paperwork required for the contests, we are not permitted to use officials from Ohio unless they also are licensed in Indiana. 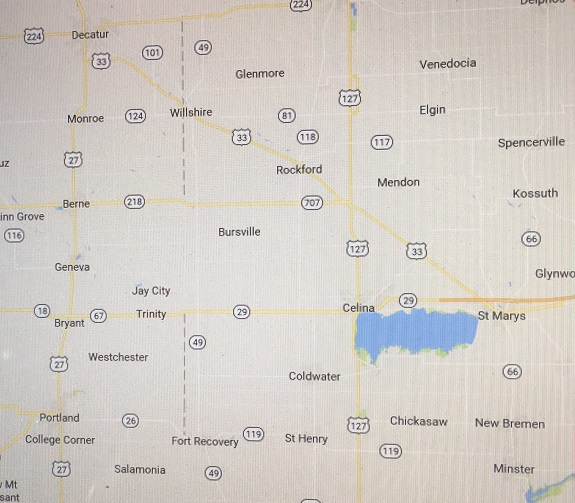 Travel of the recent years has been a big issue with athletic department budgets with the cost of fuel, it makes sense to cut down on that expense and also the time athletes have to be on the bus for travel time.

Below are several schools and distances ( according to www.distance-cities.com) they would have to travel to play a school across the ‘stateline’, plus some conference members for each school.  It is interesting to see what some of these road trips would be like.  It also helps to show you why these schools are scheduling each other.

Celina – distances according to www.distance-cities.com

Ft Recovery – distances according to www.distance-cities.com

Parkway – distances according to www.distance-cities.com

Mt. Carmel (Illinois) is on the west side of the Indiana stateline, they are not a member of an Illinois conference, but a conference made up of all Indiana schools. It has worked for both sides and it has no roadblocks from either state association.

Some states recently have added schools that are on the stateline from neighboring states, due mainly to travel issues and lack of in-state opponents.

Schools in the Stateline area are making it work, with benefits for all involved.