(3-11-18) The Springfield Catholic Central Irish won their first D IV District title since 1997 on Friday night beating Ripley-Union-Lewis-Huntington 56-45. Their opponent will be Midwest Athletic Conference Champion Marion Local Flyers who beat conference rival St. Henry 39-38 in OT in a game where the Redskins went to the four corners offense.

The Irish, ranked #10 in the Final AP D IV poll,  were led by All Southwest District 2nd team member Sabien Doolittle (6’2 Jr)  who had a game high 21 points and 8 rebounds. Trey Dunn (5’8 Jr G), a 3rd team All Southwest District selection, added 11 points in the win. Jacob Woeber (Sr),  Southwest District Honorable Mention, had 10 rebounds as the Irish out rebounded the Blue Jays 41-23 and had a 28-18 point scoring edge in the lane.

“Doolittle does a fantastic job of recognizing when we need a big bucket. When the time counts he definitely steps up and makes some big shots when we need them.”

The Irish will also count on Mykah Eichie, who was named All Southwest District Honorable Mention, when they face the Flyers.

Marion Local has it sites on winning the D IV State boys basketball trophy and would like to set it right next to their D VI State football trophy they won this season. For the Flyers it has been a year to remember, winning both the MAC football and basketball championships and never losing a game in the process to a conference member.

Last season the Flyers lost in the D III Regional Semifinal Final to Archbold 48-24, they drop down to D IV in this first season of the competitive balance plan.

Friday night the Flyers were able to hang on and beat their MAC and county neighbor St. Henry (#5 in D IV)  39-38 in OT.

I think Rosie (Redskins coach Eric Rosenbeck) had a great game plan, and none of it was a surprise. We knew if they got the lead they were going four corners and we knew they would play a junk defense. We just couldn’t make shots, and when they went up by 8, I knew we were in trouble. That’s why we switched from man to the 1-3-1 and that helped us get back in the game.

The Flyers are now the only MAC school remaining in this year’s tournament.

The two will play in the regional semifinal  Tuesday at 530 pm at Trent Arena in Kettering. The winner will play the winner of the Russia-Ft. Loramie game. 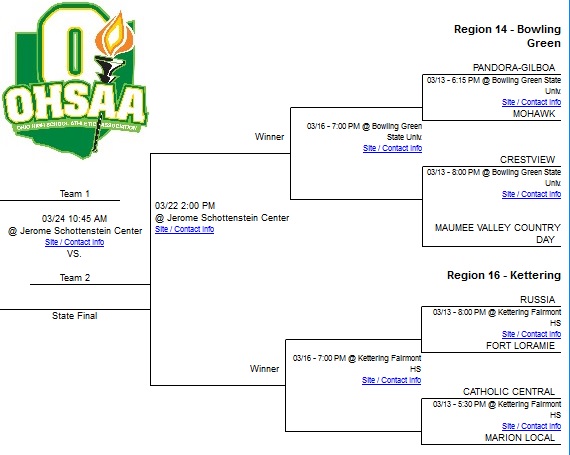 A Look At The Two Teams