Related story from Janesville Gazette’s Eric Schmoldt– Not all will be happy, but WFCA accomplished its objective

Multiple changes will effect schools in the Stateline area, including the Big 8 and Rock Valley Conferences.

Schmoldt’s story goes into detail on the changes below. 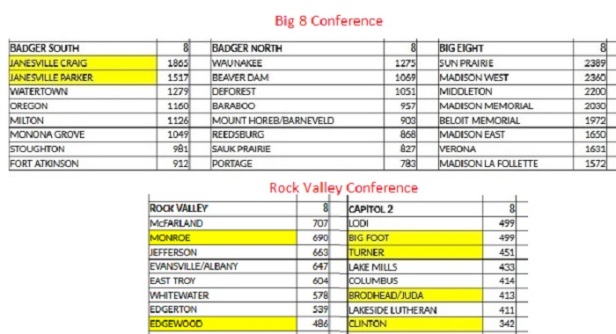 Craig would have an enrollment 33% higher than any other school not in Janesville. Enjoy the Badger South. https://t.co/3LLakB66RU

(7-23-18)  Conference realignment has been a significant challenge for the WIAA, member schools, and football programs for many years. With the issues becoming more and more prevalent, and often driven by the sport of football, last winter the WIAA tasked the Wisconsin Football Coaches Association with developing a proposal to address football-only conference realignment, an idea that had significant support from school administrators at the 2017 WIAA Area Meetings. After months of work by an ad hoc committee of WFCA Executive Board members, the WFCA has released its proposal.

The objective of the WFCA plan is to form a football-only conference model for implementation in the 2020 season that brings uniformity to the number of schools per conference and the number of conference games played by each team. Currently, some conferences feature as many as 11 teams while others feature as few as four. Some teams must win five games to qualify for the playoffs, while others have to win as few as two. Many schools are also having significant difficulty in finding non-conference games during the middle of the season if in a league with an odd number of teams.

The framework of the plan is to move all 11-Player football programs into uniform conference alignments of mostly eight-, but some seven-team leagues (along with nine-team conferences depending on total number of schools offering football). It has been our objective from the start to keep as many conferences together as possible while reaching the stated goals of the proposal. The WFCA final draft has moved only 18% (or 72 of 390+ teams) playing 11-Player football to a different conference. The WFCA has sought input from its members and contacted most of those schools that would change conferences. It is also worth noting that a 2017 WFCA survey showed more than 65% of coaches favored developing football-only conferences over the status quo.

There will be a designated process for schools to request review and relief from their designated conferences, with a two-year cycle (see below). A committee would review official written requests from member schools by February 1st of odd-numbered years, and then provide a recommendation to the WIAA Board of Control, who has final say in all realignment matters. Requests for relief must include the written approval of the head coach, Athletic Director, High School Principal, and District Superintendent. They must also provide rationale for moving conferences (not being able to win is not enough) as well as a plan for a proposed change.

WIAA procedures will also be in place to address situations where a team drops football, enters a new co-op, switches to 8-Player, or new teams are formed. Requests for relief would only be made in odd-numbered years, to be reviewed and then any changes implemented in the even-numbered years. Once implemented there would not be any changes until the next even-numbered year, so all conference designations would apply for a minimum of two years.

This plan is a joint effort between the WFCA and WIAA Executive Staff that addresses many of the problems with the current conference realignment process and issues related to playoff qualification in many parts of the state, while creating uniformity in how teams make the postseason. The goal of the committee has NOT been to provide conference or school realignment relief from their current situations. However, during the process, if an opportunity presented itself, without disrupting the uniformity objective, the committee was able to provide relief to some some schools to place them in a more competitive situation.

The WFCA and the WIAA both realize that when tackling something this big, some members will be unhappy with their conference placement. NO plan will ever be perfect for everyone. NO plan will ever make everyone 100% happy. The WFCA looked at many situations that have historically been trouble spots and addressed that could be improved without creating additional issues. We encourage our membership to support this model and give it a chance to meet its objective.

This proposal has been provided to the WIAA, who will seek input from member schools and administrators over the coming months, including at this fall’s Area Meetings. The WIAA has final authority to change or adjust the plan at any time.

In the document below, teams highlighted in yellow have moved from their current conference affiliation. Conferences highlighted the same color and positioned next to each other are “sister conferences”.

Rationale and Other Criteria

Other Items of note:

Below is a timeline of past and upcoming meetings regarding the WFCA Football-Only Conference Realignment Plan:

Based on feedback received from member schools, the WIAA will determine when the plan will be presented for final approval to the WIAA Board of Control. That could be this fall, or perhaps January of 2019.

If passed as presented, the timeline for implementation would then be:

Process for Review and Relief

We will have the opportunity to evaluate/change Football-Only Conferences every two years. This will not be an automatic change or evaluation. Schools/Teams will have opportunities to be be adjusted on the ODD years if/when an issue occurs or a proposal is brought forward to the committee. This must be done before Feb. 1st of the ODD numbered year.

The Football-Only Committee will be made up of the following:
1-2 WIAA Members
2-3 WFCA Board of Directors (NVP, SVP & Pres. Elect)
2 Athletic Directors / Admin.

When asking for a Review/Relief from a Football-Only Conference. The teams will have the opportunity to submit a Review/Relief proposal that the committee will evaluate and consider.

The timeline for this will be as follows: School’s Athletic Director will submit the written proposal to the WIAA by Feb. ​1st​ in the ODD numbered year.

The written proposal MUST include:

In Review, the following steps need to be taken when asking for review/relief from a Football-Only conference:

Written Proposal due to the WIAA by Feb. 1st in the ODD numbered year. Proposal to include:

Badger, FRCC, Milwaukee City, VFA, & Woodland (2020 Listed Teams)
These are the larger (14/16-Team) Conferences that will need to split, two 8-team groups or two 7-team groups. If it is in two 7-team groups, these are automatically paired (sister conf.) for the bye week of conference play.

These conferences can configure however they would like before the 2020 season (must have something in to WIAA by Feb. 2019). The WFCA/WIAA has a recommendation proposed for those schools if they cannot come to an agreement on how they would like to “split”. They DO NOT have to go thru the same Review & Relief process to switch within their full conference, as long as no team is leaving or coming into the conference.