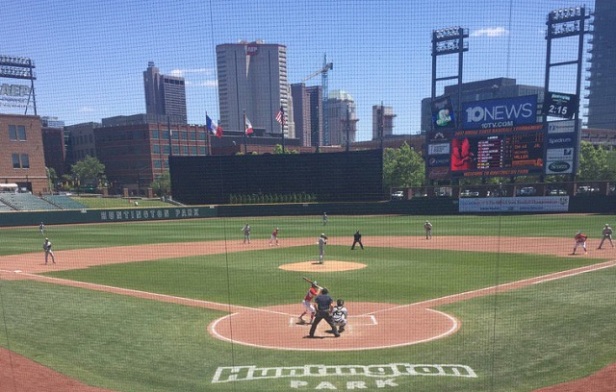 COLUMBUS, Ohio (6-2-17) – Three runs in the top of the first inning carried No. 8 Minster (24-7) past top-ranked Toronto (27-4) by a final score of 3-0 in a 2017 OHSAA Division IV baseball state semifinal at Huntington Park on Friday, giving the Wildcats a berth in their fourth state final.

With the bases loaded with two outs in the top of the first inning, a long fly ball to right field was dropped, allowing Minster senior Isaac Dorsten, senior Bryce Schmiesing and junior Isaac Schmiesing to score, giving the Wildcats a 3-0 lead through one.

Toronto was making its third appearance in the state semifinals and its first trip to the state tournament since 1998.

Russia wins in the bottom of the 7th

COLUMBUS, Ohio — Russia (24-6) earned a 7-6 win over Dalton (16-12) on a walk-off single in the bottom of the seventh inning of a 2017 OHSAA Division IV baseball state semifinal at Huntington Park on Friday.

With the game tied at 6-6 with two outs in the bottom of the seventh and runners on second and third, Russia sophomore Evan Monnier singled up the middle to score senior Dylan Cordonnier, giving the Raiders a 7-6 win.

Russia will play in its second state championship and first since 1975 on Saturday at 4 p.m. against Minster (24-7) in the Division IV state final. Russia and Minster are separated by approximately 13 miles.

The Raiders scored seven runs on 10 hits and were led by Cordonnier, who went 3-for-4 with three RBIs while also scoring three runs. Russia senior Clay George went 2-for-2.

Dalton was making its second trip to the state tournament and first since 2005.