(2-24-18) Central Noble won the Indiana 2A State Girls Basketbal Championship today over Winchester. It was the school’s first ever state title.

Meleah Leatherman knew exactly how to celebrate the title and boy oh boy did she ever.

She had a double-double to lead the Cougars with 11 points and 12 rebounds.

She definitely has the best post-game celebration of the season in any sport, in any state in  any country, it is All-American type stuff!

See below why she deserved to be so excited.

Central Noble Rallies for First State Championship in School History
Central Noble rallied from a six-point, halftime deficit to post a 46-42 win over Winchester in the Class 2A championship game at Bankers Life Fieldhouse.

The Cougars (23-5) roared back behind the scoring of Sydney Freeman, who scored 11 of her team-high 14 points in the second half to lead the school to its first state championship in any sport. The victory for coach Josh Treesh’s squad is the first of the tournament over a ranked team. Winchester (26-3) came in ranked second in the final state 2A poll.

After falling behind, 12-4, in the first quarter, Winchester used a 14-7 spurt in the second quarter to take a 25-19 lead into the break. Central Noble came out in the second half with a pressure defense that helped it force a 30-30 tie after three quarters.

The winners moved out to a 38-32 lead in the fourth, only to see coach Holly Gutierrez’s squad fight back within 44-42 on a three-point play by Maddie Lawrence with 1:11 left. Lawrence led all scorers with 20 points.

Central Noble held on, however, as Freeman clinched the game with a bucket after regaining possession of the ball near the baseline with :25 left. Central Noble’s Meleah Leatherman added 11 points and a game-high 12 rebounds. 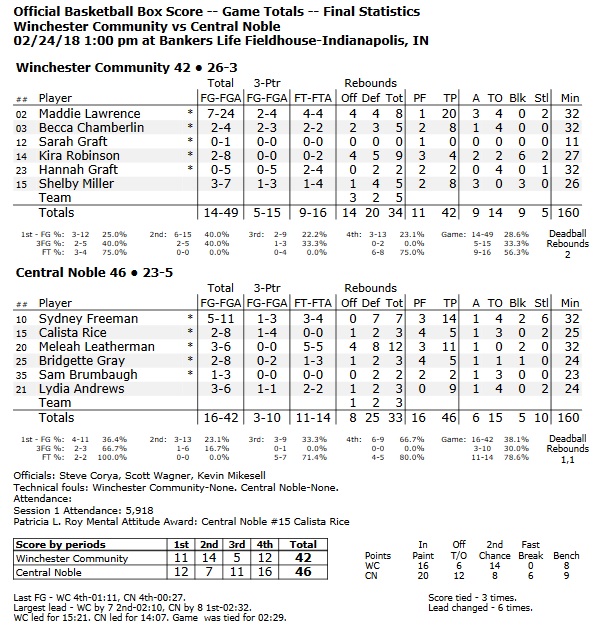 It runs in the family

Practically the entire city of Albion was at the game… including this guy 😂😂😂 (yeah, that’s @Meleah_Joy00‘s dad) pic.twitter.com/LaI6kUUmjy

That feeling after winning semi-state…