Katie Horstman practiced for her first pitch at Yankee Stadium tonight by throwing rotten tomatoes over her backyard fence. When it was time for the pitch, she RAN out onto the field with the Yankees. @AAGPBL pic.twitter.com/NPxsFgKrAX

Minster’s Katie Horstman (83 yrs old) threw out the first pitch of the game.

As a hitter, Horstman ranks in the AAGPBL all-time list with a career .286 average (6th) and 23 home runs (11th), despite playing just four of the league’s twelve seasons. 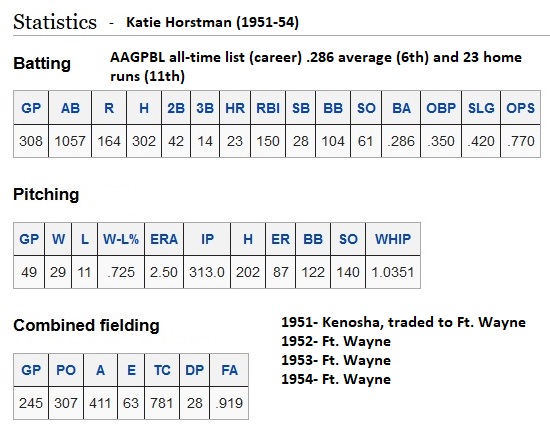 The History of the AAGPBL

The All-American Girls Professional Baseball League marked its 75th anniversary on May 30, 2018, the date of the first game in 1943. The AAGPBL was formed by Chicago Cubs owner and chewing gum mogul Philip K. Wrigley in response to the War Department’s plans to draft large numbers of men, including MLB players, for World War II during the summer of 1943.

After rigorous tryouts, 60 women—some of them as young as 15—were signed to professional league contracts earning salaries of $45-$85 a week ($656-$1239 today). They were divided into 4 teams: the Kenosha (WI) Comets, Racine (WI) Belles, Rockford (IL) Peaches (of A League of Their Own fame), and the South Bend (IN) Blue Sox. 108 games were played during the regular season, and the team to win the most games was declared the pennant winner. The top two teams then competed in a series of play-off games for the League Championship. The Racine Belles won the 1943 season and became the first World Champions of the All-American Girls Baseball League.

Over its 12-year run, the All-American Girls Professional Baseball League gave more than 600 women the opportunity to play professional baseball for the first time. The league disbanded in 1954, but it has stayed with the players for the rest of their lives. Marilyn Jenkins (age 83) says the AAGPBL was “a great opportunity to learn about baseball and ‘life’ from great female athletes,” and according to Lois Youngen, 83, “It helped me realize the true meaning of ‘team.’ We win or lose together.” Through A League of Their Own, the league’s story has become a part of American culture.

One thought on “Horstman Throws Out First Pitch At Yankee Stadium”