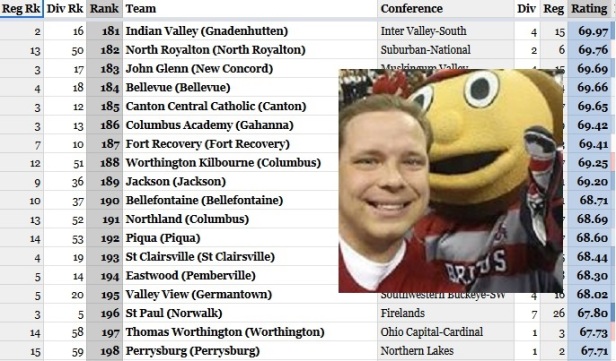 D-I: Every home team won on Friday night in the largest division in the state, making for some excellent pairings in the regional semis this coming week. Aside from R1, where Mentor and St. Eds will roll, every game will be competitive. If you want one game to keep an eye on, Elder vs. St. X is your game, where Elder is only about a touchdown favorite over a senior class who won a state title when they were freshmen.

D-II: In one of the biggest upsets of the weekend, previously undefeated Turpin were eliminated at home by Columbus St. Francis DeSales. That gives La Salle a clear path to the state semis out of R8. Up north, nobody does as R6 is about as balanced as they come. Avon Lake, Avon, and Benedictine are about as even as they come.

D-III: Aurora-New Philadelphia is a state semifinal quality game being played in the second round of the playoffs out east. Mansfield Senior benefits from Holy Name’s upset of Tiffin Columbian and is the new favorite to come out of R10. But, Bishop Hartley and Trotwood-Madison are still the most likely pairing in Canton

D-IV: Well, Clinton-Massie WAS one of the favorites… Looking forward, there are no cakewalks left to be found in D-IV this coming week. While Wyoming was the preseason favorite, they have a tall task against Indian Hill. Perry is the favorite, but CM showed how little that means in a balanced division.

D-V: Two of the top five remaining teams in D-V are going to end their season this coming week. Kirtland-South Range and Oak Harbor-Eastwood both feature some of the best mid-sized teams in the state. And the winners don’t get any breaks as they will likely see Akron Manchester and Orrville respectively in the regional finals.

D-VI: Anna went from being slightly the odds-on favorite to a 5-in-6 favorite after stomping the best competition they will see all month. Fairview is the 3rd best team remaining in D-VI and the Rockets are -still- 3-touchdown favorites this coming weekend.