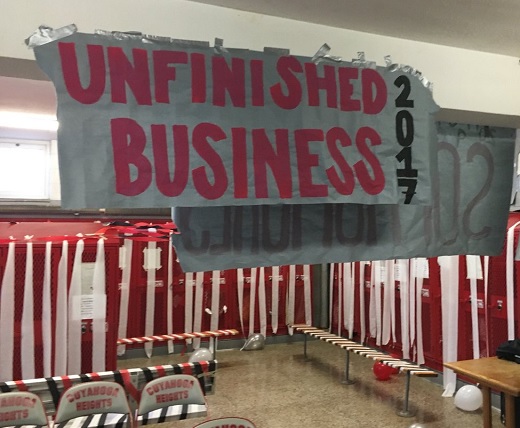 (11-27-17) Last season for Minster and Cuyahoga Heights their seasons ended in losses in a State Final Football game, this year they will play each other in the D VII finals and one of them will ‘finish’ their ‘business‘.

Cuyahoga Heights moved down from D VI to D VII this season, after the new competitive balance plan was put in place, last season they lost to Marion Local in the D VI finals 21-17.  Friday night they will take to the field against another Midwest Athletic Conference member Minster.

The Redskins, who only played nine regular season games in 2017, is 12-1 on the season. Their only loss came to Kirtland 42-34, who will play Marion Local for the D VI title this weekend.

The Redskins had no problems winning their State Semifinal game over Danville 38-8.

“Their size took over on us. They started pounding the big boy. Their quarterback (senior Ryan Polk) does a nice job of reading (the defense) and he followed the fullback through the hole several times. That’s a hard team to stop. They have the horses up front and the skill kids to go with it.

We did our best. That’s a great team. Our kids just got worn down. They got big bodies … their 6-3, 6-4 kids blocking our 5-10 kids, sort of smothering us and making it hard to get off the blocks.”

The Redskins were led by Fullback Lucas D’Orazio who gained 145 yards on 24 carries and Quarterback Ryan Polk who added 136 yards on 15 carries and three TDs, including a 70 yard run, he also threw a 4-yard TD pass to 1st Team All-State receiver Dylan Drummond, who added a 27-yard field goal.

The Redskins have put up a lot of points during the playoffs, in three of the four game they scored 40 or more points.

“Offensively, we have been on kind of a roll lately and you never know when that is going to end. So you have to play good defense and good special teams and tonight I thought we did well on both.”

Cuyahoga Heights did have a scare in the Regional Finals, but hung on to beat Dalton 42-41.

FB: Cuyahoga Hts scores with 7:53 left in the 4th Q, we are tied at 35-all #DRFridayFootball pic.twitter.com/wWWhkReL8y

FB: Cuyahoga Hts scores with :16 left in the 4th Q to take a 42-41 lead #DRFridayFootball pic.twitter.com/Vz4bYGWswW

Minster (10-4) comes into the game as a #4 seed and with 4 losses, the most of any of the teams playing for a State title this weekend. All four losses came in consecutive weeks and all of them to MAC members, (all D VI schools and all qualified for the Playoffs) Marion Local, Ft. Recovery, St. Henry and Coldwater. Since that time they have reeled off seven wins in a row, including a State Semifinal win over the the #1 ranked team in D VII, Norwalk St. Paul, 40-7.

Cuyahoga Heights will have to stop Minster’s 2nd Team All-State Quarterback Jared Huelsman. He rushed for 271 yards on 44 carries and had five touchdowns and  was 11-of-16 passing for 93 yards and a TD in the win over St. Paul.  His top target was Isaac Schmiesing who had eight receptions for 72 yards and a TD.

“People would be amazed at the character he has…He’s Mr. Everything for us. He stands for what we believe in. It sucks Friday is our last game with him.” – Minster HC Geron Stokes on Sr QB Jared Heulsman (6 TDs in Final 4) @DonKemper @Mark__Porter @MaxPreps @ohsfca @EL_Sports1 pic.twitter.com/dqWVX3bwY4

The only thing we know for sure about this final game is either Cuyahoga Heights or Minster will win a State football championship.

How they reached the playoffs –