(1-16-18) The 41st McDonald’s All-American game announced today the players that have been selected to play in the 2018 all-star event that will take place March 28th at Atlanta’s Philips Arena.

The West Team will be led by Bol Bol (Findlay Prep – Henderson, Nev.), who will attend Oregon in the fall. He will be joined by highly ranked Duke commit, Cameron Reddish (Westtown School – West Chester, Pa.) and Simisola Shittu (Vermont Academy – Saxtons River, Vt.) who plans to suit up for Vanderbilt next season.

Of the 24 boys selected to be McDonald’s All Americans, two sets of current high school teammates will be featured and five have yet to make their college decisions. Of those who have decided, Duke and Kansas have the most commitments with three each, followed by Oregon, North Carolina and Vanderbilt with two each. The Boys Game begins at 7 p.m. EST March 28 and will air live on ESPN.

Of the 24 girls selected to be McDonald’s All Americans, Baylor has the most McDonald’s All American players suiting up next fall with four commits followed by Tennessee with three commits. Like the Boys roster, this year’s Girls roster features two sets of high school teammates that will play against each other. The Girls Game begins at 5 p.m. EST March 28 and will air live on ESPN2. 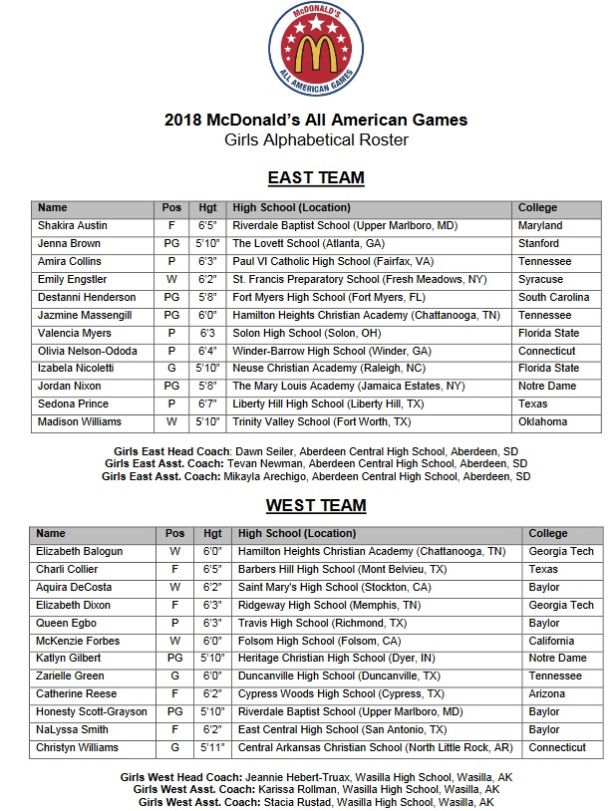 “The 48 players selected for the 2018 McDonald’s All American Games represent the future of basketball,” said Morgan Wootten, Hall-of-Fame basketball coach and McDonald’s All American Games Selection Committee Chairman. “As we leave a great legacy in Chicago, we look forward to hosting the Games in Atlanta and providing the players with the opportunity to show the entire country their tremendous talent.”

Tickets for the 2018 McDonald’s All American Games go on sale Feb. 5 at 10 a.m. EST via Ticketmaster or the Philips Arena box office. Ticket prices start as low as $10.