(3-14-18) Minster will have its hands full Thursday afternoon when it plays the #1 team in D IV Waterford in a girls basketball State semifinal game.

Waterford is hoping to finish business from last season after losing to Berlin Hiland in the State final game 61-41 in 2017.

Waterford is making its fourth consecutive trip to Columbus, which includes a 2016 state championship. The Wildcats finished the season as the top ranked team in D IV, and had to beat two top-five AP ranked teams to get out of the regionals.

Alli Kern, an Ohio Dominican signee, is a 5-foot-9 senior who leads the way and was named the Player of the Year in D IV this week, averaging 15.0 points, 7.5 rebounds, four steals and two assists per game . She is a three-time All-Ohioan and four-time district and regional champion. She also was a sophomore starter on the 2015-16 state champion team

Another first-team All State player is Megan Ball (14.5), a 5-foot-11 senior. Rachael Adams (9.5), a 5-foot-8 senior is an All Southeast District second team member, while Guards Hayley Duff and Hannah Duff were named to the Honorable mention list.

In their 47-42 Regional final win over Fairfield Christian Academy Kern had a double-double with 17 points and 19 rebounds.

Waterford has a 26 game winning streak, they started with a season opening loss to Parkersburg (W Va) 56-52, but came back at the end of December to beat Parkersburg 63-49.

Minster brings a balanced team to Columbus for the school’s fourth trip to the state final four, with their last trip coming in 2010. The Wildcats have won two state championships in 1998 and 2004. Two of the Wildcats starters have already made their college decisions, senior Taylor Kogge, a 6-foot-2 forward (7.1 ppg.) is headed to Ohio Northern and 6-foot-2 junior post Courtney Prenger (11.7) has verbally committed to Xavier University.  Prenger was just named to the D IV All State second-team and was also a first-team Southwest all-district player. Named to the third-team all-district squad is freshman Ivy Wolf, a 5-foot-8 point guard averaging just under 10 points per game.

Two of Minster’s three losses this season came to two teams playing each other this week in the D III State semifinal game at Columbus. Those Wildcats losses were to Midwest Athletic Conference Champion Versailles 46-39 on January 25th, that loss would leave Minster in 2nd place in the MAC for the year. The other loss was to Elyria Catholic on January 14th 44-41. Their third loss came to another D III team Anna 45-40.

The two Wildcats will play at 3pm at the Schottenstein Center on Thursday and will play the winner of the  Ottovile-Buckeye Central game on Saturday at 10:45am. 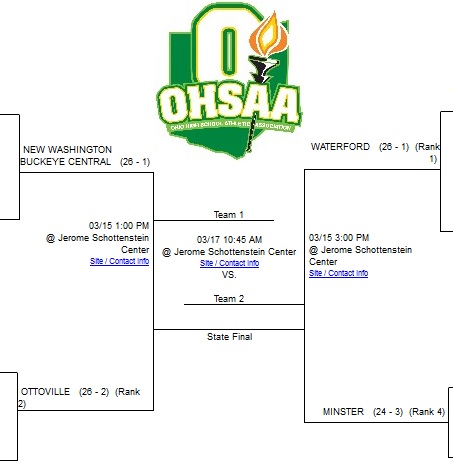