Above is the proposal the board approved today.

(4-3-18) High School baseball coaches in Ohio are now starting to wonder how they will ever be able to reschedule all the rain-outs they’ve faced so far this season. The weather conditions for the very near future do not look conducive in helping out with the upcoming games scheduled (or rescheduled).

The OHSAA is scheduled to have its Sectional tournament draws on April 29th, 25 calendar days from tomorrow (Wednesday). With the first game just one month away starting on May 5th (weather permitting).

According to current team records, none of the Stateline area teams have yet to play a league game this season, so throw that into the mix of things to worry about.

The OHSAA currently allows member schools to play 27 games during the regular season, with the last day of the season being June 9th. That date does allow each school to play games up to that date, but once a team is knocked out of the tournament (which starts May 5th) some schools decide not to continue with the season.

Baseball coaches have been trying to get an extended season to beat the yearly weather conditions Ohio faces every spring.  Coaches are also dealing with ithe pitch count, trying to cram in games using the current plan makes it a real issue, the extended season would help with that problem as well.

But the OHSAA board, spearheaded by the principals input, voted down the last proposal before schools even had a chance to vote on it last spring. The coaches association is now trying (again) to push another proposal for the membership to at least consider and vote on it.

Again this year has put a focus on why the baseball season should be extended.  Now is the time to move forward on making it work. A possible solution could be to try it on a trial basis, Wisconsin, did this a year or two ago to see if a change works (playing halves in boys and girls basketball).  They now play halves, it worked.

Let’s hope the future of baseball remains bright in Ohio and that student-athletes are the winners in the end.

Thanks to these sites for league standings below: 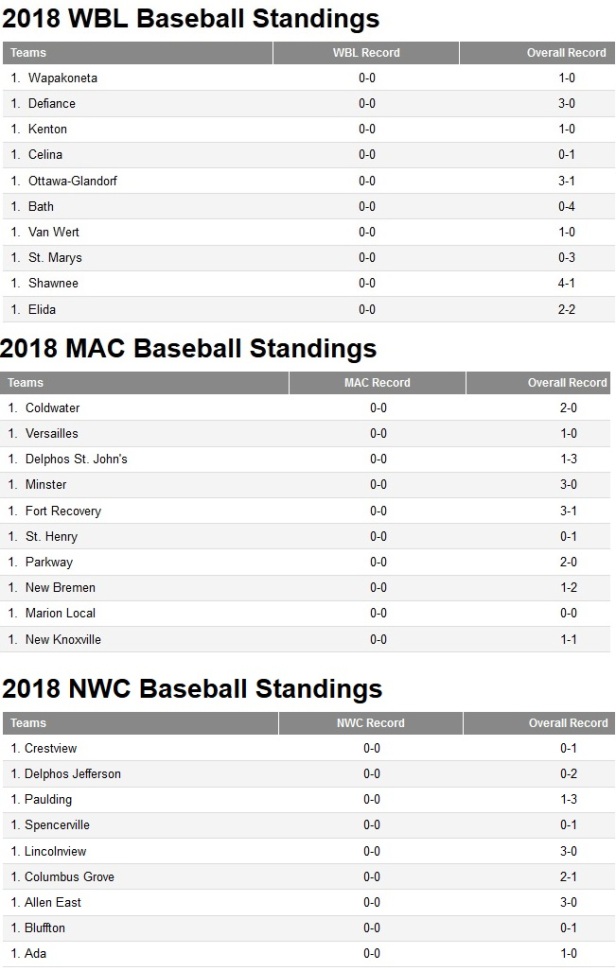