(4-19-18) On August 11th 2011 Caroline Found lost her life in a tragic scooter accident. Found is the subject of the recently released girls volleyball film ‘The Miracle Season‘ and the story-line features her just before her accident to a season ending Iowa state volleyball Championship for her teammates at Iowa West.

On the day of her death she tweeted just three times, her final tweet before the accident:

Watching wizard of oz under a big fluffy blanket #refreshing

Watching the film, You Tube videos and reading about her you know she was a great volleyball setter, who led her team to a state title in her Junior season. But we also see that she was a very, very special young lady off the court.  The film shows her true charm and why she was so well liked, but it also showed she had some very special people in her life, her mom and dad, her Coach, her classmates and her teammates. 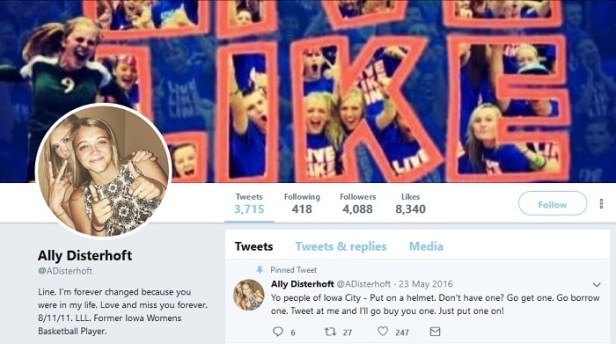 Ally Disterhoft, was her teammate at Iowa West and went on to star for the Iowa Hawkeyes on the hardwood. Her current twitter page shows the impact Caroline made on her life, including Ally encouraging everyone to ‘Put on a helmet’, Caroline was not wearing one when her accident happened.

Her profile statement tells of the impact Caroline had on Disterhoft:

Line, I’m forever changed because you were in my life. Love and Miss you forever. 8/11/11. LLL

Has the movie made an impact? Yes it has, the Twitter hashtag #LiveLikeLine will show you numerous tweets of volleyball teams going as a group to see the film and their thoughts about it, lots of reviews and just those who loved her story. This film will be around for a very long time, girls volleyball teams will be watching for years to come when they are getting ready for their season to start, before a big game or before a tournament game. It has captured the hearts of many who love the game of volleyball, which is a very close knit family.

@brez6258 we took our girls to see “The Miracle Season” and they both wanted “Live Like Line” shirts! They came yesterday and they are proudly wearing them today!! #LiveLikeLine pic.twitter.com/kP0DHB9npo

Don’t be surprised in the future if you are a  volleyball match and you hear  ‘Sweet Caroline’ being played over the speakers or sung by the crowds across the US. The song will forever be identified with ‘Line’.

On August 4th, one week before she lost her life, she retweeted this tweet:

Twitter tells the impact she had made in those she knew and loved during her short lifetime.  Now her memory retold in ‘The Miracle Season’ is an inspiration to many who never knew her when she was with us.

In another film based on a true story in Iowa high school sports, ‘The Final Season‘, Sean Astin playing Norway baseball coach Kent Stock has an emotional locker room scene when he asks his team:

‘How do you want to be remembered?’

For Caroline – Live Like Line – is a wonderful way to be remembered.