The world lost an absolute warrior today – the ultimate model of character & toughness & had a smile that will forever go unmatched. #5 will continue to make us all better. #Grateful #ActionJackson #relentless pic.twitter.com/XCxQ3nbarg

(4-6-19) Today the Minster community mourns the loss of ‘Action’ Jackson Hogenkamp (16). Hogenkamp was diagnosed in 2017 with osteosarcoma, a type of bone cancer.  He passed away Friday afternoon at Dayton Children’s Medical Center. 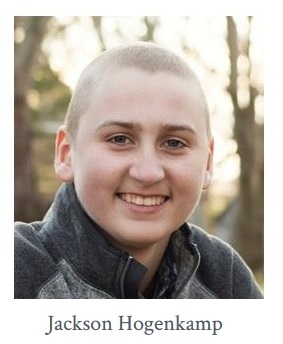 Jackson Dane Hogenkamp, 16 year old son of Scott & Shelly (Sandor) Hogenkamp of Minster, Ohio, died peacefully Friday afternoon at Dayton Children’s Medical Center. Mass of Christian Burial will be 10 am Tuesday, April 9, 2019 at St. Augustine Church, Minster. Friends may call from 2 to 8 pm Monday April 8 and 9 to 9:45 am on Tuesday at the Hogenkamp Funeral Home in Minster. In lieu of gifts the family requests that you please make donations to Dayton Children’s Hospital Child Life Services. Condolences may be left at hogenkampfh.com

Thank you Lauren Roetgerman (Almighty One Athletics) for helping make this video possible. We interviewed Jackson Hogenkamp (Shelly Sandor Hogenkamp & Scott Hogenkamp) a couple of months ago for a religion class about God Winks. Jackson was blessed with his mom’s gift of words and his dad’s contagious personality. Please take a moment and see why this kid was so incredibly special. His RELENTLESS SPIRIT will live on.

The last posting on the ‘Action’ Jackson Facebook page is quite touching.

After our big trip to Arizona we settled back into some routine at home and enjoyed a little bit of down time. But, after about a week of that we made a trip to Top Golf with some of Jackson’s friends. We had tried to go in January, as Jack had been wanting to take friends for awhile, but the polar vortex cancelled that trip. It took us this long to get it back on the calendar. It just so happened to be Scott’s birthday as well, so it turned out to be a wonderful celebration of life, friends and terrible golf swings! Thank you Shawn Sharp for your help and connections for making that day come together! And a special thank you to Top Golf and Kennedy, our server, for your generosity! We all had a great time.

The Monday following our Top Golf trip Jackson finally succumbed to the nausea that has been chasing him these past few weeks. He hadn’t eaten or drank very much for a day or so and I called DCH before dehydration became a significant problem. They were able to give him some IV nausea meds and fluids and it made a world of difference. We stayed overnight that Monday for observation just to be sure his nausea was under control. We came home Tuesday afternoon and I was treated to a happy and talkative Jackson for the ride and the remainder of the evening. It was so sweet and special-we talked about how if he felt like this he thought he might just be able to go to CYSC in June. We discussed what hurdles we’d have to get over and what he may be able to do. He was positive and excited and it was such a blessing to share that conversation with him!

Wednesday he had PT and a pretty normal day. He was beginning to have some muscle spasms in his legs, but he wasn’t overly uncomfortable. PT gave him some great things for him to do to try to help work them out.

Thursday we were gifted Cincinnati Reds Opening Day tickets! Wow! Such fun. We were charged up to go – Jackson and I had never been to an Opening Day – the weather was perfect, the seats were awesome and the Reds won! Hey, cannot get much better than that! We took Josh along with us and soaked up all the fun. Jackson suffered terribly with violent leg spasms, he couldn’t get comfortable and did his very best to enjoy the day. We were all super excited when Derek Dietrich hit the go ahead three run homer! Just remember that you read it here first that we fell hard for him in Arizona. Go DD! Thank you Meyers!

That night was incredibly difficult – none of us got any sleep. He couldn’t stop the spasms, his legs moved wildly out of control and nothing I gave him gave him any relief. Somehow we made it through the night, got up and headed down to Sycamore Hospital to have his pain pump refilled. The spasms continued, he was exhausted, frustrated and miserable. Fortunately, the appointment was super quick and he went straight up to Dayton Children’s to see Dr. E and get some relief.

Upon seeing him, his initial thought was that he was having a reaction to Lyrica, the pain med he takes for his nerve pain. That was distressing because the Lyrica has really given him relief. The plan was to take him off of it and treat with Benedryl and a muscle relaxer. It was to take a couple of days for the Lyrica to get out of his system.

Jackson continued to thrash and jerk his legs around completely out of his control. He had very difficult nights both Friday and Saturday. He was given Valium for the legs spasms and it did finally give him some relief, it just didn’t last until he was able to have the next dose. Also on Saturday he began to struggle to get air. He was started on oxygen. He was completely exhausted, anytime he tried to pull himself higher into the bed he gasped for air and you could see the fear and panic in his eyes.

When Sunday came and his symptoms all remained, it was pretty clear that the Lyrica was not the issue. He had a CT scan to see exactly what we were looking at. We clearly didn’t need a scan to see that the disease was spreading and I bucked it at first. I didn’t like to think about him trying to lay flat and struggle with pain and getting air. They explained to me that what the scan showed would help all the necessary teams (pain management, Neurology) see precisely where he was and it would allow them to give Jack exactly what he needed for comfort.

The CT did indeed show aggressive advancement of the Osteosarcoma. It also indicated an increase in fluid around his heart. His right lung (the good one) had more disease and fluid filling it as well. That greatly explained his difficulty getting air. What seemingly happened overnight may have been building for awhile, but we don’t really know for sure.

That brings us to where we are now. On the final leg of this journey. We are currently inpatient at DCH – what has been our 2nd home for the past 20 months – our family here is taking especially good care of our sweet boy. They all love him so much. We had discussed tapping the lung to drain the fluid in hopes of helping him breathe easier. But after an ultrasound of the lung, it was decided that it wouldn’t give him the relief we were hoping for and the discomfort and pain he’d have to endure wouldn’t be worth it as the lung could possibly fill back up very quickly.

We have a plan for Jackson’s comfort and last night and today we’re MUCH better days for him. He was able to finally sleep and get much needed rest. He had good periods of wakefulness today, he had some smiles, wise cracks and hugs for his nurses. I cannot begin to tell you how loved we feel and how well we are being cared for – all of us, not just Jackson! We love all of them so very much! He also had a surprise visit from his little friend, Scarlett. She has always loved him, but was a little shy if he got too close, but today she gave him big hugs and it was the sweetest thing ever.

Jackson got a fancy new bed today – it massages and moves under him. It can be heated or cooled and it keeps him from having pressure points on his body. He seems to love it. It is rather like laying on a cloud. We are unsure if we will ride out this last leg here at the hospital or go home. It was our original thought that we’d be home. But Jackson is happy here, it gives him peace of mind that they have the meds he’ll need when he needs them, he is on high flow oxygen and that brings him peace, they have equipment that aids in his comfort. I know that we would be trained with the meds, the catheter and the O2 … but I am telling you, I never want to see that terror and panic in my boy’s eyes ever again. I’m terrified that we’ll get home and his need for O2 will increase or the meds will grow ineffective and we won’t be able to resolve the problem and were an hour away from help. The decision does not need to be made tonight and it can be changed once made.

I want to thank everyone for the overwhelming love, support and prayers these past 20 months and thank you for never ceasing – your love and prayers have never wavered and they continue to sustain us. We are blessed beyond measure and so wrapped in God’s love. Please continue to pray for Jackson, his siblings and extended family and for Scott and myself.

When we set out on this journey, we never believed it would be anything but a journey to wellness. Indeed, it is a wellness different than the original plan, but a journey that ends in the loving embrace of Jesus is a journey well completed.

Isaiah 43:2 When you go through deep waters, I will be with you.

Philippians 4:13. I can do everything through Christ who gives me strength.

One thought on “Minster Mourns The Loss Of ‘Action’ Jackson Hogenkamp”