(7-22-20) Since the riots in Minnesota and the death of George Floyd ‘political correctness‘ has been in the forefront of today’s world. One of those issues includes the using of ‘Redskins’ as a mascot for athletic teams.

The issue became a major story when the Washington NFL team recently decided to discard the mascot and name.

Ohio high schools have been highlighted in the issue of the use of the ‘Redskin’ mascot.

On July 2nd, after several years of debating the change of the mascot, Cincinnati suburban school Anderson made the move on a vote by the school’s Board of Education.

Three Ohio schools, located in West Central part of the state, have decided to keep the ‘Redskin’ mascot.  Two of the schools, Wapakoneta and Ft. Loramie, have made it public that no change is going to be taking place anytime soon. The third school, St. Henry, has not addressed the issue publicly.

So why the controversy?

Contrary to polls showing that relatively few Native Americans take offense at the (Washington) Redskins’ name, a  UC Berkeley study has found that at least half of more than 1,000 Native Americans surveyed are offended by the name and Native mascots in general.

University of Michigan research reveals high rates of opposition to not only the use of gestures and chants, but also to Native American mascots and team names like the NFL’s Washington Redskins.

Sept. 25, 1863: The Winona (Minn.) Daily Republican features an announcement that uses the term “redskin” as a pejorative:

“The State reward for dead Indians has been increased to $200 for every red-skin sent to Purgatory. This sum is more than the dead bodies of all the Indians east of the Red River are worth.” 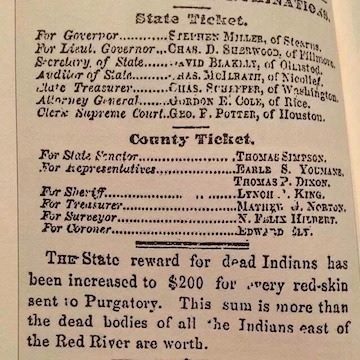 In a 2019 story written by Angelina Newsom –

My tribe doesn’t identify as “redskins”. This is a derogatory term coined by colonialists often historically used interchangeably with “savages”.

There is one very interesting twist to the ‘Redskin’ mascot. It comes from Arizona  –

Red Mesa High School is a public high school serving Navajo students in ninth through twelfth grades. Our campus is located on the Navajo reservation, and if you know just where to look, you will find us tucked away in a very remote area of northeastern Arizona, about 25 miles southwest of the Four Corners.

“The community and alumni support the current logo of the school.”