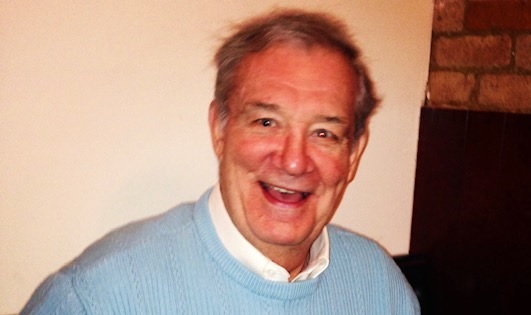 (5-30-20)  Don Martin, a well known St. Marys resident, passed away this week. Known for his love of sports he spent many years doing color commentary on WKKI (K-94) high school basketball games. His down-to-earth approach to a game he loved made for a great broadcast.

“I was lucky enough to do several games with Don at KKI, what a love he had for the sport. He had real insight and understanding of the game and made the listener want to hear more. He was as much fun on the air as he was off the air. He loved St. Marys athletics, but he treated a Celina guy like me like a friend…he was a good one! Everybody loved him”

A private service for family will be held at Miller-Long and Folk Funeral Home, with a celebration of life planned for later this summer. A scholarship fund in Don’s name is being established, with more details to follow

Donald Ray Martin, 79, passed away on Tuesday, May 26, 2020, at Joint Township District Memorial Hospital in St. Marys after a brief illness.

Don was born on March 1, 1941 in Martin, Kentucky to Sandy and Mildred (McGlothen) Martin. Don was a 1959 graduate of Memorial High School and a 1963 graduate of Morehead State University, where he played on the men’s basketball team. He enjoyed a 35 year-plus career in marketing at Goodyear Tire and Rubber Company. Goodyear was a special place for Don, as he’d arrive hours before his start time just to enjoy a cup of coffee and to walk around the plant to catch up with friends. It was there that he met his wife, Diana (Ashman) Martin, who preceded him in death on February 16, 2020. Don and Diana were married on February 5, 1972, and they are survived by one daughter, Mandy Martin Lammers (Matt), Arlington, Virginia. Don was extremely excited to welcome his first grandchild in June.

Don was an active and visible member of the community. He was a fixture on the youth sports circuit, coaching everything from American Legion baseball to YMCA soccer and basketball to girls’ softball. He greatly enjoyed his time as a color commentator with Big Ralph Guarnieri at WKKI K-94 sports, covering local high school basketball games. He was a former chair of the Summerfest softball tournament, and he coached a frequent winner of the women’s division of the Coldwater Muscular Dystrophy Association softball tournament. He was a member of the Rider Rooters, where he sold programs prior to home football games, and he prided himself on being the first person in line at the away games. Don was a diehard University of Kentucky Wildcats basketball fan, and he enjoyed showing off his incredible collection of UK memorabilia, including a recruiting letter he had received from Adolph Rupp. His basement was aptly named The Cats’ Den, and it was the location for countless parties, poker games, and ping pong tournaments over the years.

Don touched the lives of many, many people, and he will be remembered for his quick wit, big personality, and genuine interest in positively influencing the lives of children. Don lovingly cared for his wife, Diana, throughout her 31 year battle with MS, and he loved nothing more than spending time with his daughter and son-in-law, often with a nice glass of bourbon in his hand.

Don was preceded in death by his parents, Sandy and Mildred, his in-laws Harold and Dorothy Ashman, and his beloved sister, Patricia (Halbert) Nagel.

In addition to Mandy and Matt, Don is survived by his two step-grandchildren, Madison Lammers and Caitlin Lammers, both of New Knoxville. He is also survived by brothers-in-law, David Nagel, Bowling Green, Richard (Linda) Ashman, St. Marys, and a sister-in-law, Patricia (Gerald) Johns, St. Marys, as well as many nieces and nephews that he loved very much.