(3-5-19) Rockford Public Schools has apparently decided to take the interim tag away from Carl Armato, he is now listed as Guilford’s Boys Head Basketball Coach according to the IHSA School Directory. But no official word has been released on the subject by school officials.

The need to name Armato the interim coach happened in late January…that is when Rockford Guilford’s first year head boys basketball coach Antonio Maestranzi was put on Administrative Leave by RPS 205. According to a WIFR-TV article on January 31st , RPS 205’s Communication Coordinator Cathy Bayer confirmed Maestranzi was on leave effective immediately and that assistant coach Carl Armato would take over as interim head coach. According to several media sources Maestranzi was arrested by the Loves Park Police Department on January 29th on DUI charges.

Maestranzi was hired as the Guilford Head Coach in April of 2018. He was also hired by the District as a  Behavioral Intervention Specialist, but due to other issues with this position not associated with the DUI charges, he is no longer working in that capacity as well.

For Maestranzi, who played professionally in Italy, Guilford was his first high school head coaching job. In the past he had been an assistant coach at Aurora Marmion.

“Coach Maestranzi brings a lot of enthusiasm and excitement to this position. He’s hungry to help build the program with our students on the court, in the weight room, classroom and community.”

Armato who is a former Rock Valley College men’s head basketball coach and Northern Illinois University men’s assistant coach was retained as an assistant coach at Guilford after Dean Martinetti was relieved of his coaching duties last year. It was also Armato’s recommendation that RPS hire Maestranzi. 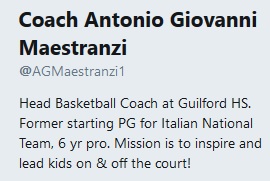 The last activity on his account was February 26th and he still has a picture of the Guilford basketball team on the header of his account.

Despite the turmoil Guilford ended the season with a winning season at 18-14 and 9-9 in the NIC 10. Guilford beat Jefferson in the opening tournament Regional game and lost to East 56-42 to end their season.

Coaches (and athletic Directors) disappearing from the scene are nothing new at RPS 205, Maestranzi seems to be the latest to disappear.