(11-3-19) The story of the upcoming Ohio High School Athletic Association Football Playoffs is the absence of not one, but two undefeated teams in Gibsonburg (VI-23) and Northwood (V-18). The OHSAA has talked about expanding the playoffs in the past week, but that’s just an extra game in a state where the student-athletes already play more than their college counterparts. The solution is to better balance the regions moving forward or, as I have suggested, get rid of regions all together. But, enough about that, let’s look at each division as these student-athletes get ready for the first round of the OHSAA Football Playoffs!

D-I: Not going to say that St. Ignatius deserved to make it to the playoffs at 5-5, but with the Wildcats missing out for the first time since 2015, the path through Region 1 just got significantly easier for favorites Mentor and St. Edward. The best bets from southwest Ohio are Springfield and Elder. Central Ohio will have the game of the week when Westerville Central heads up to Olentangy Liberty to get revenge in a 8-1 matchup where that 8-seed is slightly favored.

* Best team missing: Cleveland St. Ignatius (5-5), 4 of their losses came by less than a score.

D-II: Here we have the division with probably the least amount of drama going into the first round. Harrison is a sort of an x-factor in a loaded Region 8. Going a perfect 8-0 against in-state competition, the Wildcats could upset Turpin and La Salle en route to the State Semifinals, or they could fall to Canal Winchester this Friday.

D-III: Region 9 in northeast Ohio may be the most balanced region in the entire playoffs. Aurora, New Philadelphia, SVSM, Chardon, Kenston, heck, even Streetsboro, could come out of that region into the state semifinals. On the other side of a brutal path will probably be favorites Bishop Hartley or Trotwood-Madison, waiting in the wing. (Though, Bishop Hartley getting London is a weirdly challenging prize for the top seed.)

* Best team missing: Akron East (7-3), finished the season on a 7-game winning streak, didn’t give up a single point in their last 22 quarters of play. 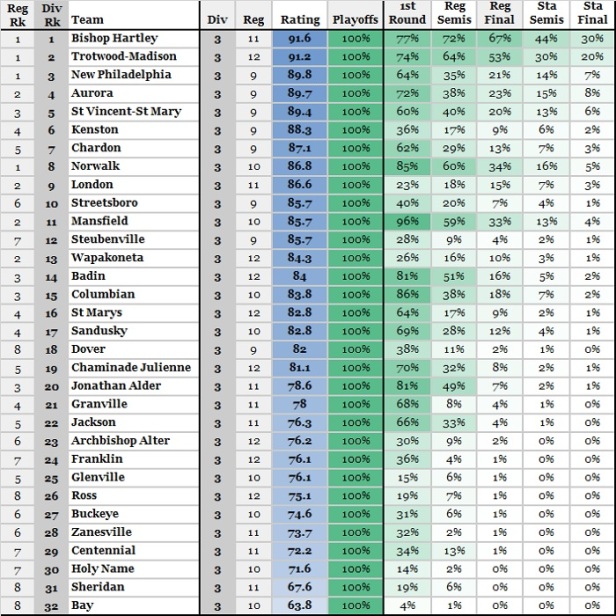 D-IV: If I had to pick a most balanced division, here it is. Early on, I was convinced that Wyoming was the favorite, but as the season progressed, Clinton-Massie, Perry, and Licking Valley all showcased why they belong in that conversation. And I can’t leave out whoever wins the first round shootout between Indian Hill and Kenton, as they will be in that state championship conversation if they progress to the regional semis.

* Best team missing: Van Wert (6-4), an offense that averaged 32 points per game would’ve been tough to stop for any defense in D-IV.

D-V: A few weeks ago, I said that Kirtland was the best bet to go 15-0. I still stand by that claim, despite a likely regional semifinal matchup with South Range. Aside from Elyria Catholic-Orrville and Liberty Benton-Eastwood, don’t expect much drama in the first round in D-V.
* Best team missing: North Union (7-3), their record is a result of a super tough schedule, with losses to Heath, London, & Jonathan Alder, all bigger schools with a combined record of 26-4.

D-VI: The state champion is probably coming from R23. The average Projection Index ratings of the 8 teams in R23 is 80.4. The average for R10 and R11 in D-III is 78.1. First round meeting of Minster-Anna is a showcase of the #1 and #3 teams in the Projection Index. 6 of the 7 best teams in the division are in R23, the only exception being Covington. The Buccs also have the best odds of making it to Canton at 55%.

* Best team missing: Columbus Grove (7-3), I know I should give it to Gibsonburg (10-0), but their schedule was nothing compared to the Bulldogs who were 0-3 vs. playoff teams and 7-0 vs. non-playoff teams.

D-VII: It was a down year in Maria Stein as Marion Local went 8-2, their first time with multiple regular season losses since 2012. Despite that, they are still the odds-on favorite to win the state title in D-VII. That said, their biggest challenge will likely come in the regional semis where they could face off with Fort Loraime, the 2nd highest rated team in D-VII.
* Best team missing: Convoy Crestview (5-5), what can I say? There was not much depth in D-VII this year.

For full predictions for the first round of the playoffs, be sure to click the link below. Good luck to everybody this coming Friday and Saturday.